“He won’t want to run into Charlie either,” Floyd said.

“Absolutely not!” Willy agreed.
“No–sirreebob,” Floyd shook his head emphatically.
“No way, Jose!” Willy said.
“Under no circumstances!”
“He’d be real sorry.”
“Might as well just throw himself off a cliff!”
“Sooner he should cover himself with honey and sit naked on an ant hill!”
“Better he should shoot himself at sunrise every day for a week!”
“Or boil himself in oil!”
The two crows looked back at Minnie. “Nope, that’d be something he wouldn’t want to do. Run into Charlie!”

Floyd and Willy were born in the projection booth of the drive-in theater and spent their formative weeks watching movies. Armed with a dramatic flair and a taste for worldy cuisine, the brothers take off for the highly urbanized neighborhoods surrounding Downtown and the University.

But it was Heckle and Jeckle, beloved cartoons of my childhood, who inspired my characters, Floyd and Willy. Even my brother thought so.

Floyd and Willy are their own crows, however. Taking after no one but themselves, their adventures comprise visiting trash cans behind the exotic and mundane restaurants near the university campus, and watching game shows and movies from the windowsills of student apartments. That, and spying for Charlie, the blue-eyed patriarch of a great (as in famous and huge) crow family.

Still, it is only right that I give credit where credit was due, to Paul Terry, the cartoonist behind Heckle and Jeckle. Carried away on a wave of nostalgia and the endless tides teeming with Heckle and Jeckle links on the internet to every possible subject that has ever existed in thought, word, deed, or image, video.

Heckle and Jeckle are postwar animated cartoon characters created by Paul Terry, originally produced at his own Terrytoons animation studio and released through 20th Century Fox. The characters are a pair of identical anthropomorphic magpies …
–Excerpt from Wikipedia

Whoa, wait … MAGPIES ? They don’t look exactly like the magpies mawing down on the Nanking cherries outside my window. They have the white vests all right, though their beaks are black. Unlike the yellow of Heckle and Jeckle. 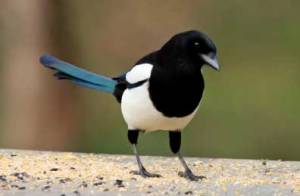 As it turns out, there are several kinds of magpies. Black-billed, mostly. And like crows, very intelligent. Magpies, for example, passed the ‘Mirror test’ (recognizing themselves in mirror) before their cousins, crows  and ravens did. Click here for more…

All of which is beside the point of Heckle and Jeckle having yellow beaks. It matters somehow, even though they are cartoons, that these two have some connection to reality.

“Found only in the Central Valley of California….” That’s what the Wikipedia article says.

That explains a lot. Irresistibly close to Hollywood, the two magpies (will I ever get used to it?) Heckle and Jeckle winged it to fame and fortune. 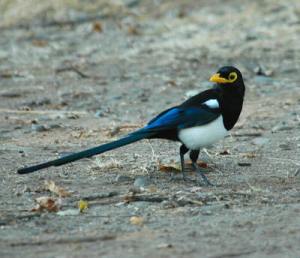 I’ve since watched many H & J cartoons on YouTube, remembering some of them. It’s been many decades. Every one of them opens with: “Heckle and Jeckle, the talking magpies in….”

But I couldn’t read then, back in the day. How was I supposed to know?

I can’t believe I am alone in this. But not many people are copping to the same childhood belief, that Heckle and Jeckle are crows. It’s not as bad as finding out about Santa Claus, or the Tooth-fairy. But still…

I know there are others. You know who you are. Believing in crows all these years. This one’s for you: 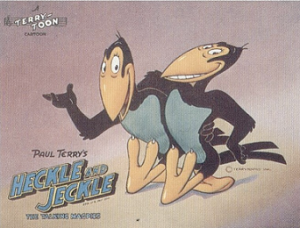