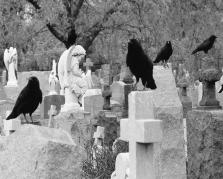 Imagine perching in the trees above a group of crows and ravens engaged in a heated discussion.
‘It’s the Great Corvid Council!” I might say to you. ”
Look!” you might say, “there’s a human, too!”

A Patua’, in fact—a human who speaks the language of the crows. Known to the corvids as Jayzu, he’s a Jesuit priest named Alfredo Manzi, and he is meeting the Council for the first time.

There are sanctuaries, and then there are Sanctuaries…

Alfredo stepped out from behind the trees and walked into the very surprised group of corvids. “I am honored to be among you,” he said quietly to the hushed councilors.

Many of them nodded to one another, mumbling their approval. A few waved a wing at him, and others called out their greetings and comments. “Yo! Jayzu!” “That’s a Patua’?” “He looks just like a regular human!”

Hookbeak, the Aviar of the Council spoke, “And we are honored you came to us, Jayzu. Greetings!”

Alfredo held his hands out as a few of the councilors stepped forward to greet him.

“We were gladdened by the news of a Patua’ on Cadeña-l’jadia,” a raven said cordially. “I am Longshanks. Welcome.” He brushed his wing across Alfredo’s hand.

“Is it true, Jayzu,” a crow spoke out above the muttering, “you are building a birdsanctuary on Cadeña-l’jadia?”

“Not yet,” Alfredo replied, “but someday I—”

“Sanctuary? What kind of sanctuary?” one of the ravens interrupted in mild alarm. He wandered through the councilors on the grass as he spoke. “There are sanctuaries and then there are Sanctuaries, so we wonder exactly what you intend to do in this sanctuary. Some oddball sanctification ritual perhaps? Will you require feathers? Entrails?”

“Sanctuary?” a few of the councilors said as they looked at one another in apparent confusion.

“What’s a sanctuary?” asked a crow.

“Sanctuary—the word comes from the root, to sanctify,” another crow replied sanctimoniously. “To mortify and cleanse the flesh.”

Alfredo felt exasperated with some of the councilors, but there was little he could do other than wait politely and grab what chance he could to speak. He glanced at Hookbeak, standing silently next to him on the grass. Will he not intervene and let me talk?

“Ah,” the raven who had asked the original question said. “It is a bathing place then. In this case, for birds. That does not sound so bad.”

“Unless the cleansing of the flesh is done with blood, Restarea,” a raven said. Hoots of denial circulated through the Council. “It has happened,” he continued. “Human use of animals as sacrificial offerings for ritual ceremonies to appease their gods is well known.”

“Will this Patua’, this Jayzu, be experimenting on birds in his sanctuary?” another raven asked. “Perhaps feather plucking for his rituals? Dissection?”

There will be no sacri—” Alfredo said and glanced at Hookbeak standing silently next to him on the grass. Will he not intervene and let me talk?

“A sanctuary is a refuge, Walldrug,” Starfire said, impatiently waving a wing. “Safe haven. Rest stop. Now please, let us remember that Jayzu is Patua’. I daresay he reveres the corvid as much as Bruthamax did.”

“Charlie of the great Hozey Clan,” a crow said, “well, his wife told my wife that he told her that Jayzu knew nothing of Bruthamax.”

Gasps of incredulous dismay pulsed through the councilors, and they looked at one another and Alfredo in disbelief. “Never heard of Bruthamax? How can that be?” someone hissed. “He knows not his own kin!” whispered another. “How can we trust him?”

Bedlam broke out as factions lined up against other factions. “Interventionist!” one side cried out, while the other shouted “Isolationist!”

“Are you all daft?” Starfire shouted, striding to the middle of the two groups. “Or just deaf? Did you not all just find it remarkable that there was a Patua’ among us? Remember thinking the Patua’ had completely vanished? Shocking as it is, Bruthamax is not known among humans outside of the city surrounding us.”

The councilors quieted down as Starfire spoke. By the time he finished, dignity had been restored. A few seconds of silence reigned, and Alfredo seized the moment.

“That is true.” He paused, momentarily shocked that no one interrupted. “Human knowledge of the Patua’ is significantly less than yours. I am Patua’ yet knew not there were others of my kind.”

Thirteen pairs of eyes, some black, some blue, stared back in silence. “I did not know of Bruthamax until I came to Cadeña-l’jadia,” Alfredo continued, grateful for the opportunity to continue speaking. “Since then, I have learned much, thanks to the corvids for keeping his stories and sharing them with me. I am proud to be counted among Bruthamax’s kin.”

Most of the councilors softened and some even had a few sympathetic words of comfort: “Any kin of Bruthamax is a friend of ours!” “Long live the Patua’!” “Long live Jayzu!”

An explosive sound nearby scattered the councilors, and someone shouted, “Meeting adjourned!”

Alfredo was suddenly alone with Hookbeak and Starfire in the small clearing. He waited for a few minutes for the Aviar to speak, but the old raven kept silent and still as stone, listening. Not a creature stirred. Even the insects had been silenced.

“Thank the Great Orb for that explosion,” Starfire said at last. “Nothing scatters the corvids like the sound of gunfire. Otherwise we would be beaking this to death till sunset.”

“I thought it was just a car backfire,” Alfredo said.

“It was,” Hookbeak said. “But no matter, we accomplished what we wanted today.”

“Yes,” the Aviar replied and leaped into the sky.

“Indeed, Jayzu,” Starfire said. “Thank you.” He flapped his wings and took off after Hookbeak.

“For what?” Alfredo called out after the ravens as they flew away. “What did we accomplish?”

But the ravens were gone and he was alone, but for several black feathers that lay on the grass, twitching in the breeze.

Insofar as corvids are very much like us, I imagine their Council might resemble our Congress—a group of bickering factions that peck irrelevant minutiae to death without accomplishing much. Perhaps I corvopomorphise…

Perhaps not, given the history of our relationship with these birds…in any case, Corvus Rising is a fantasy….an Ecofantasy of mine that we could all be Patua’…

About Corvus Rising, and where to get it 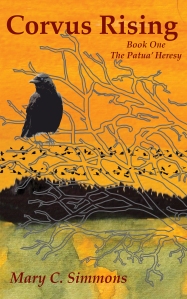 One thought on “The Great Corvid Council – Excerpt from Corvus Rising”