The newspaper article below inspired my new short story, The Judas Crow. It’s a rather ghastly account of humans using an animal for sport killing of its own kind. 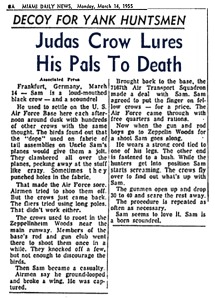 I imagined what might be like to be inside the mind of the Judas Crow—having no idea about Judas or Jesus or betrayal on a scale it seems only our species is capable.

In The Judas Crow, a ‘small human’—do crows recognize our small ones as our children? do they recognize gender?—nurses an injured crow back to health, brings him food and water, and encourages him to fly again.

The Judas Crow spends many days in a cage, longing for the freedom of the skies and to be re-united with what is left of his family. He wills his broken wing to fly again, never imagining for a moment the act of betrayal he is being tricked and enticed into.

Judas was Not a Crow

What exactly would the title “Judas Crow” mean to the crow? Guilt at delivering one’s own kin to their deaths? —a human invention that ought to apply to crows as well as to humans?

It wasn’t easy, this mind-meld with a species not my own. But we know from scientific research that crows perceive, feel, form bonds with one another, and grieve at the death of a loved one, so we have at least this kinship with them.

I wonder what do we look like to them? Do they think we are intelligent? Or sentient? Care about our fellow humans? Do they see the carnage we humans enact upon other humans and yet do not eat them? Moments after death, all animals are meat. Are they astonished at this waste?—what other reason would one kill another animal, if not for its meat?

Who is the scoundrel here? The Judas Crow, or the humans who created him?

It’s in the eye of the beholder, I reckon. But perhaps we should take another lesson from the animal world.  You kill to eat, to go on living.

Not just for the hell of it.

One thought on “The Judas Crow”