Ever since I wrote Corvus Rising, I’ve considered in great depth and detail how the other living beings on Earth are more like us than not. We humans are fond of viewing our species at the top of the evolutionary ladder that we invented to explain the differences in anatomy and intelligence between Us and Them.

Our species is evidently highly favored: the very Deity we invented created Us to have dominion over Them.

More and more, however, it is apparent that our world view of creation is all wrong.

In the case of the corvidae (crows, ravens, magpies, jays…) we now know that their brains are very nearly the same size as ours (proportional to their bodies) and that they are not only intelligent, but sentient as well. (The Gifts of the Crow, Mazluff, 2012)

And we know that they talk to each other, as shown by Michael Westerfield’s marvelous book, The Language of Crows, whose recordings of crows and ravens dialogs in a variety of situations tells us their speech is not just about looking for a mate to make little corvids with.

Then there’s that little pufferfish, whose connection to the Universe I share. Blows me away. We are all hooked into the same life-giving forces, by whatever deity you or I wish to call it. I like to call it Art.

Ants are pretty cool; among my favorite books as a child was The City Under the Back Steps—a marvelous story of a couple of kids who magically get shrunk down to ant size. 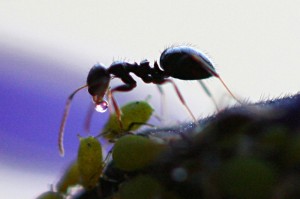 The children are shown all around the colony by the ants, and were instructed (as I was) in many of the ways of all ants. For instance: the ants kept herds of aphids and milked them for the sugars the little buggers sucked out of the rosebush. They really do that.  (Read more about how ants milk aphids here…)

Natural science from a fictional children’s book: a marvelous way to learn.

I am a fan of ants, more or less. As long as they don’t invade my house or sting me.

I watched nervously one summer as a gigantic ant colony constructed a subterranean civilization around the size of Denver in my backyard.

The problem with a humongous ant colony in my back yard: their sheer numbers so close to where I live.  They kept opening up exits and entrances all over the place, including right next to the porch and back steps. Made me nervous.

These are the kind of ants with the big jaws on their heads connected a sack of poison on the other end that is at least a third the size of their whole bodies.

Ant bites are bad news. Painful bad news. Every time one injects me with its personal stash of formic acid, it’s worse than the time before. So I am looking a little askance at the city under my back steps. I don’t want them there, but there they are.

My father used to pour gasoline down ant holes and light it. Horrifying. So are pesticides. I do believe the ants have a right to be alive and pursue their ant-like goals. Just not so close to my soft, living flesh.

I didn’t want to kill them. I just wanted them to move. So I flooded them out with the garden hose, a slow trickle of water that filled up the vast network of caverns and passageways. Ants do not have lungs, I reasoned, therefore cannot drown.
But they do float well.
Jillions of ants floated up and out; most found things to cling to and rode the current to edge of dry land where they disembarked.

As soon as I turned off the water, the ants went to work re-building what I had ruined. The next day, I filled the ant hole up again, and ants bubbled up again. When the flood stopped, the ants started building again. I marveled that none of them went belly up on the sidelines, waving their six little legs in the air, otherwise whining and bellyaching about unfair the universe is, or how hard their lives are.

We do that. The animals don’t. They get over it and get on with living.

The end of the ant story: I kept watering the ant hole and they kept rebuilding. I admired the hell of them. No complaining, no retaliation. Just one foot in front of the other five, and with a pebble in each jaw, they rebuilt.

And I kept destroying. We went on like this for days, me alternately admiring them and destroying them; the ants just kept rebuilding.

They finally moved. They got sick of it, evidently, of spending all their time rebuilding their colony after the continued disaster I brought them. So they moved, lock stock and nursery to the alley behind the house.

Beyond the reach of my hose…