The Scene of the Faux Pas 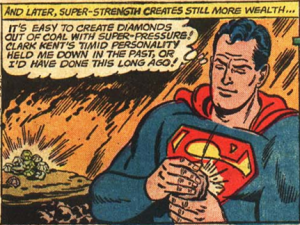 There we were, innocent boomer (and beyond) children looking up to Superman, gobsmacked by his prowess and great strength. Really? You can do that, Superman? Squeeze a lump of coal into diamond? Not just once did we witness this feat, but time after time. 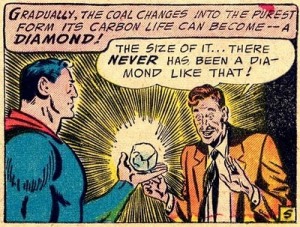 Unless Superman has Superhot hands, the Super Squeeze is just not going to cut it; diamond formation requires heat. The kind of heat you get when you shove rocks 100 miles or so down below Earth’s surface, where diamonds crystallize.

Perhaps somewhere along the way, a geologist sat Superman down and explained to him the facts of diamond formation, and how you theoretically could take a lump of coal and, given enough squeezing, make a diamond. But only if you add a lot of heat.

That would explain why Superman started using lightning to make diamonds.

Lightning is very, very hot, along the order of 54,000°F, about 5 times the temperature of the surface of the sun.

But, heat alone can’t turn coal into diamond and lightning strikes at coal mines are far more likely to catch the coal layer on fire than to make a single diamond.

Superman Gets with the Program

Am I being too persnickety here?

Perhaps I expect my Superheroes to be omniscient as well. Or at least geologically literate. But is this fair?

I, of all people should criticize an author for taking what is known about something on Earth and flying into fantasy with it? (see Corvus Rising-my book about crows who talk to humans.)

In my own defense, it is not impossible for crows and humans to communicate (see Language of the Crows), and I offer a scientific, gene-based explanation for this ability.

Fantasy fiction takes us away on the gift of tongues, illuminating the path into the darkness of the silent unknown, tantalizing us with magical journeys that reveal the secrets of our universe. Hopefully we have the ears to hear and the eyes to see.

I’m glad Superman saw the light, keeping his Superhero image intact in the eyes of geologists everywhere. In the late 20th Century, however, when cartoon characters leaped from the printed page onto the big screen, it seems that Superman lost a little know-how in the diamond department.

Where’s the Heat. Man of Steel?

Alas, that Superman’s memory is less legendary than his great strength. What the cartoon knew, the “real” human did not.

That the truth of diamonds ever made it into a comic book is astonishing, however, and cause for a moment of gratefulness.

No Virginia, Diamonds Do Not Come From Coal

I am ecstatic when our scientific understanding about the Earth makes its way into cartoons, for no other reason than children watch them, the little sponges that they are. It’s very hard to dispel those childhood myths about coal and diamonds, to say nothing about the Flintstones and dinosaurs living side-by-side? For heaven’s sake, the dinosaurs had been extinct for at least 63 millions years before the first humans showed up.

We also know where diamonds come from and how they get to Earth’s surface.

Diamonds form at the base of Earth’s crust, where pressure and temperature are very great. When pressure exceeds rock strength, an intense, but short-lived volcanic eruption occurs, and molten mantle rocks are shot to the surface through kimberlite pipes at the speed of sound. 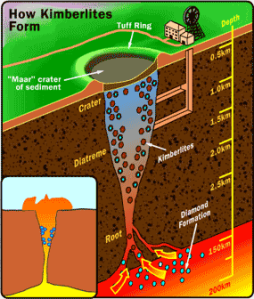 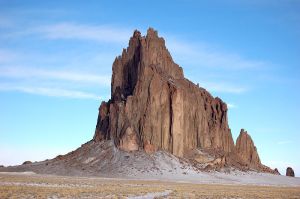 Kimberlite pipes bring up other minerals as well, like garnets, mined for use in sandpaper products. The Navajo Volcanic Field in the Four Corners area of the Southwestern US (not to be confused with Monument Valley), a few diatremes (the eroded remains of a kimberlite pipes) poke up out of the desert floor, Shiprock being the most well known.

Diamonds almost always are far older than any of the coal layers on Earth, and the carbon comprising them is almost never from living organisms. The fearlessly curious might click HERE for exhaustive information on the chemistry and crystal structure of diamonds.

Unlearning a ‘fact’ is harder than diamonds sometimes. Superman burned an urban myth into our 21st century collective memories at an early age that to this very day most of us still carry with us.

It’s not a matter of geological correctness. It’s a matter of the truth being so much more marvelous.

Shine on, you crazy diamond…

3 thoughts on “Superman and the Great Diamond Ruse”