…build her a castle

Art in the Sand

Click on image for extraordinary video: Art of the Pufferfish

Who knew pufferfish are masters of art and architecture?
Or are they merely evoking a mating ritual, in which the sole purpose of the pufferfish’s activity is to impress a female?

On either count. I am impressed. Thoroughly and completely.

I feel a certain kinship to this pufferfish, who pulls his vision from the sand. I work in clay—rarely if not never do I sketch things out first on paper. It’s not that I cannot draw, it’s that paper is but two dimensional, and clay is three. For me, it’s just easier to ‘draw,’ so to speak, with the clay in the first place.

The pufferfish didn’t draw it all out first either, for obvious reasons. No paper, no writing utensils, no thumbs…just an internal vision that drove his entire body in the performance of art. That’s how I do it too, engrossed in my task and operating from an internal vision that informs my hands to construct the compendium of details that comprise the whole.

We humans draw a firm boundary between ourselves and the rest of creation, based on a standard (set by us) of intelligence and sentience, which undergoes periodic redefinition to exclude all of creation except us. Originally defined as the ability to feel and perceive, the definition was expanded to include an ability to suffer. Once we started noticing that all animals have that ability, self-awareness became the defining quality of sentience.

I can’t imagine how the pufferfish created his art without an awareness of himself in his oceanic landscape of water and sand. Why is it that the creation of art is an instinctual mating ritual in the animals, but a sign of sentience and intelligence in us? 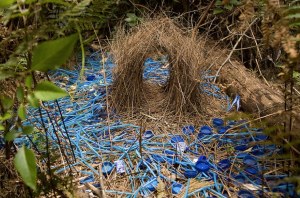 Until the pufferfish first maps out his sculpture on paper or via computer graphics, or when the bowerbirds use differential equations to construct their nests, they’ll never even approach us intelligence-wise. Right? Cool that we get to not only set the standard, but keep changing it as well so as to exclude all that is non-human. But why?

I am over-awed and comforted by my kinship with the little pufferfish creating a work of art the same way I do—from an internal vision, using his physical body. I doubt very much, however, that I could create this or any piece of art with my nose. From that perspective, the pufferfish is quite a bit more talented than I am.